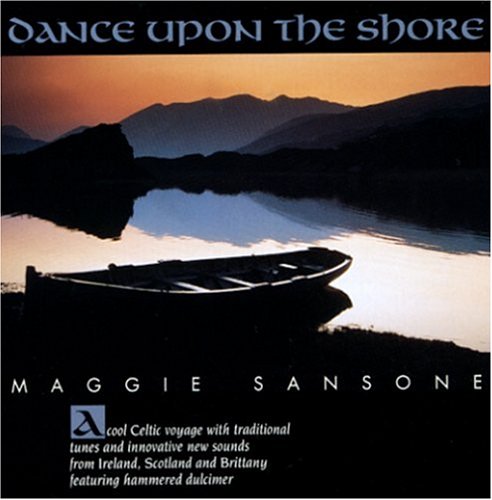 "A Celtic/New Age/jazz crossover that bubbles with life and captures perfectly the spirit of experimentation at its kernel." -- Rock 'n' Reel ( U.K.)

"A broad ranging musical tour of the wellsprings of Celtic music...comprehensive and beautiful." -- SCHWANN CATALOG

"Sansone presents the listener with a unique opportunity for mystery and mysticism." -- WOMEN TODAY

"Steeped in tradition yet often wed to the contemporary, few recordings span the gap of generations so gracefully... -- The Washington Post

About the Artist One of the most exciting and innovative hammered dulcimer players recording today, Maggie Sansone brings a unique vision to the music of the ancient Celts. She performs on the hammered dulcimer, ancestor of the modern day piano. The percussive melodious sounds of her wooden mallets dancing across eighty wire strings creates a harp-like resonant sustain that brings a special beauty to her music. Maggie has been featured on CBS-TV "Sunday Morning," and NPRÂs "All Things Considered," "Performance Today," and "The Thistle amp; Shamrock." She is the recent recipient of two prestigious awards - the ANNIE Award for Performing Arts from the Anne Arundel Country Cultural Arts Foundation and the WAMMIE for best Irish/Celtic Instrumentalist from the Washington Area Music Association. Maggie has authored seven music books for the hammered dulcimer with Mel Bay Publications and was included in their 2000 Hammered dulcimer Anthology Series featuring AmericaÂs finest performers and teachers.She is now teaching privately and offering workshops year round at the Maryland Hall for Creative Arts in Annapolis, MD. Maggie is a popular performer, equally at home at local street fairs and folk festivals to the big concert stages including appearances at the Kennedy Center Concert Hall. She is also known for producing an exciting array of Celtic and Christmas shows featuring some of the top stars in the Celtic music scene today. She was the founding member and manager for five years with the national touring show A Scottish Christmas and joined forces with one of the largest music companies in the world-BMG Entertainment to create a live concert DVD and video of the show. Maggie is founder and CEO of MaggieÂs Music record label based in Shady Side, Maryland, It features over forty recordings distributed worldwide through mail order, wholesale and retail outlets. The label has received seven "Record Label of the Year" WAMMIE awards from the Washington Area Music Association. A major article on the record label appeared in The Washington Post which said " Gaelic traditions are alive and well...Maggie's Music has been a driving force behind the popularity of Celtic 'chamber folk," which combines the intricate harmonies of classical music with the energy and spirit of folk music." MaggieÂs recordings on the record label Maggie's Music are: 1) SOLO: Celtic Meditations; A TravelerÂs Dream; Dance Upon the Shore, Mist amp; Stone, Traditions; Music in the Great Hall 2) CHRISTMAS: Sounds of the Season, Sounds of the Season II, Ancient Noels with Ensemble Galilei, A Scottish Christmas (CD/DVD/video) and 3) CELTIC COLLECTIONS: Celtic Mist and CarolanÂs Gift.

A new study of ancient Martian valleys shows that at least a quarter of them were created by massive floods from overflowing lakes billions of years ago.
Paul Scott Anderson
October 15, 2021
Space

The Lucy spacecraft is set to launch October 16 to begin its trip to the Trojan asteroids, fossils of the solar system's formation that lie near Jupiter.
Kelly Kizer Whitt
October 14, 2021
Astronomy Essentials

How big are asteroids? See comparative sizes in this video

How big are asteroids? This video shows the sizes of 22 asteroids - ranging from tiny to vast - in comparison to New York City.
Claudia Crowley
October 14, 2021
Space

19 hidden planets revealed by their auroras

What are star trails, and how can I capture them?

Moon, Jupiter, Saturn! They're a wonderful sight on the nights of October 13 to 15, 2021 as viewed from most parts of Earth. Watch for them.
John Jardine Goss
October 13, 2021
Space

The Webb Telescope is the successor to the Hubble Space Telescope. NASA said on September 8 that the new launch date is December 18.
Deborah Byrd
Lia De La Cruz
October 12, 2021
Space

51 Eridani b: An exoplanet orbits its star

An amazing animation of the young, Jupiter-like exoplanet 51 Eridani b, in orbit around its star, only 96 light-years away.
Deborah Byrd
October 12, 2021
Space

Images from NASA's Perseverance rover have confirmed that Jezero Crater was once an ancient Martian lake. Moreover, there is also a large delta formed by a river and evidence of flash floods that carried large boulders into the lake.
Paul Scott Anderson
October 12, 2021
Constellations

Delphinus the Dolphin resembles its name

Delphinus the Dolphin is a petite constellation that looks like the animal it's supposed to represent. Look for the dolphin leaping under the Summer Triangle.
Kelly Kizer Whitt
October 12, 2021

Thank you! Your submission has been received!
Oops! Something went wrong while submitting the form.

END_OF_DOCUMENT_TOKEN_TO_BE_REPLACED

19 hidden planets revealed by their auroras

END_OF_DOCUMENT_TOKEN_TO_BE_REPLACED

How big are asteroids? See comparative sizes in this video

What are star trails, and how can I capture them?

END_OF_DOCUMENT_TOKEN_TO_BE_REPLACED

1st ocean drone video from inside a hurricane

Earth is dimming due to climate change

END_OF_DOCUMENT_TOKEN_TO_BE_REPLACED

Satellites versus stars: Which will dominate the sky?