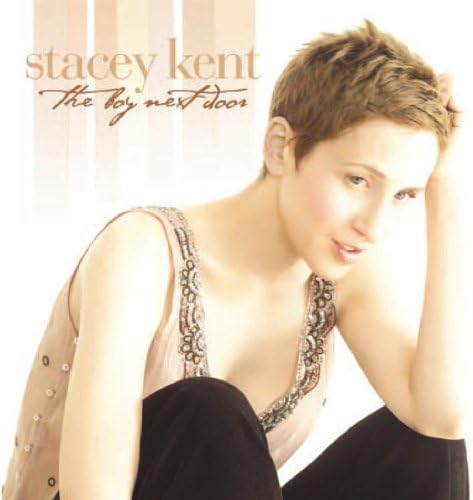 Best-selling singer Stacey Kent's latest album is a superlative set of interpretations from the great American songbook, taking its inspiration from the artists who have inspired Stacey's meteoric rise through the jazz world. With an all star band including David Newton and Colin Oxley, this album is a lesson in the art of jazz arranging as well as singing. For the last few years, Stacey has attracted plaudits from all corners of the jazz world, with Humphrey Lyttleton saying last year "I could listen to Stacey Kent sing morning, noon and night from now to eternity".

Humphrey Lyttleton's favourite vocalist is renowned for her devotion to the Great American Songbook and for her wonderful way with a ballad. For her new album 'The Boy Next Door', the tempo is still relaxed and the delivery languid, but there are some new kids on the block. Stacey's still clutching the Songbook in one hand, but in the other she's brandishing music associated with the likes of Chet Baker, Paul Simon and James Taylor.

Stacey draws consonants out like bubblegum in 'The Best is Yet to Come', her voice smooth but with that serrated edge that keeps you entranced, and David Newton contributes a tiny but perfectly-conceived piano solo on this and on the title track. Both are simple but beautiful vehicles for Stacey's Christmas-bauble vocals and impeccable timing.

'Makin' Whoopee' sees Stacey and the band getting low down and bluesy. Imagine Carrie from 'Sex and the City' as a jazz singer, and that's Stacey on 'Makin' Whoopee'. She's completely in control, with a demure, half-hidden sexiness that shines through in her diction and delivery. Stacey's musicians happily succumb to her lead - the rhythm section hangs back behind the beat and Stacey's husband Jim Tomlinson provides gentle support on the sax (but only when the lady permits it). 'Ooh-Shoo-Be-Doo-Bee' is infused with the same pert sexiness, but here it becomes mock theatrical as David, Jim and recording engineer Curtis Schwartz add tongue-in-cheek backing vocals and tons of swing behind Stacey's luscious phrasing.

Keeping the band focused on accompaniment and not on solos works to give the tightly-structured performances that we've come to expect. Nothing can ruffle her cool, in-control exterior. You can almost hear her relaxed smile in 'Tis Autumn' and in 'I Get Along Without You Very Well' she's jettisoned Chet Baker's air of mild despair and adopted stoical acceptance instead.

It's questionable whether Stacey adds anything to 'You've Got a Friend' - where even her vibrato is reminiscent of Carole King's - or to "Bookends" by Paul Simon. Both are covers, not reworks. Burt Bacharach's 'What the World Needs Now', though, demands playing and replaying. David Newton's piano sits well behind the lyric, allowing it freedom and movement, and Stacey's breathy, perfectly-timed vocals give David the space to stretch his fingers out just a little.

At 16 tracks you certainly get your money's worth from this album, and there are no interruptions from long or inaccessible instrumental solos. If that's how you like your jazz, you'll love The Boy Next Door. Ms Kent's stepping out beyond the Great American songbook and there's no stopping her now. Go, Stacey! --Kathryn Shackleton

"... a stunning ascension of intuitive, intimate singing in a voice as singular as there currently is." -- Jonathan Schwartz, National Public Radio

"...she has charm to burn, a smile that could give you hope in February and sings like nobody's business." -- "i"Wall Street Journal, November 1, 2002"br""br""Everything about it ... the glorious voice, leaves one searching for a more superlative word than 'greatest' !" -- Humphrey Lyttelton, BBC Radio 2

If you’ve ever wanted to dip your toes into the world of calcium reactors, you may have thought that the price of a reactor itself is not that bad, but the costs…

It’s not often that we write about a product twice before we’ve even set eyes on it but Nyos has forced our hand. At first it seemed like the Torq would be a simple curiosity among media reactors with some interesting…

Reef Delete is a creative new approach for the eradication of aquarium pests and parasites which doesn’t use any chemicals or injection techniques to get the job done. Unlike consumable solutions of kalkwasser, lye, paste or any number of potions…

There was a time when most of us were certainly very content to see any Euphyllia coral in a bright shade of green, but the last fifteen years have revealed a rainbow of colors we never knew existed. More discerning collections…

The Reef Factory pH Meter is one of the newest and modest modern pH monitoring solutions to arrive in the aquarium hobby in a very long time. As important as pH is in all types of aquariums, it’s quite surprising…

The biggest challenge in reef keeping is keeping the alchemy of light, flow, nutrients and chemistry stable for long enough that corals grow to an appreciable size. But once corals really take off, our favorite part of reefing is grooming and…

Anthias are a diverse group of quintessential pink and yellow marine fish which occur from the tropical shallows to the cold water depths of our seas. Many species of anthias are quite common and cheap, making great and hardy aquarium…

The InkBirdPlus Aquarium Heater is a heating element with some very interesting features but it doesn’t appear to be anything more than a private labeled product. Coming in at $28.99 for 300 watts this aquarium heater is made with a…

Tubastraea megacorallita is a fitting name for a coral that has been recognized in the aquarium for its very large polyps and accompanying corallites and has earned a very fitting common name. The ‘Fat Head’ Dendro has long been rumored in the…

The wide band anemonefish, Amphiprion latezonatus, is a rare clownfish which is endemic to a limited range in Australia. Beside the wide white bars, ‘Latz’ clownfish are also recognizable by their beautiful blue lips. This species is often found in…

Listen to the Reef Therapy Podcast

A sump is the life support system of a healthy saltwater aquarium. Some hobbyists may…

The biggest challenge in reef keeping is keeping the alchemy of light, flow, nutrients and…